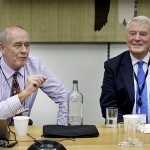 Dr Max Atkinson is to be awarded a ‘Lifetime Achievement’ award by the UK Speechwriters’ Guild.

The award is being made for his outstanding contribution to the theory and practice of speechwriting and public speaking over the past 35 years.

Dr Atkinson came to national prominence when he used his academic research into the speaking techniques of top politicians, and applied them to a speech delivered by a novice at a party political conference.

The speaker Ann Brennan went on to win a standing ovation at the SDP conference in Buxton in  1984.

The results were made into a ‘World in Action’ TV documentary which can be viewed here:

Dr Atkinson published the results of his research in a book called Our Masters’ Voices.

He also had a chance to put his theories to the test by offering speechwriting support to Paddy Ashdown, who became leader of the Liberal Democrats in 1989.

In 2004, Dr Atkinson published his book Lend Me Your Ears, which explains the techniques in simple terms to any layman who might wish to adopt them.

Founder of the UK Speechwriters’ Guild, Brian Jenner, said, ‘Using recording technology which was new at the time, Dr Max Atkinson discovered the ‘claptrap’ – the means by which speakers can provoke positive responses from audiences. He has championed ‘the language of public speaking’ which most people can master.’

Dr Atkinson will be presented with his award at St Matthew’s Conference Centre, 20 Great Peter Street, London on Wednesday 25 November from 6.30pm.

Tickets can be purchased here