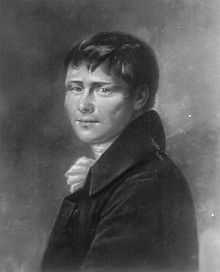 The German playwright, Heinrich von Kleist, wrote an essay in 1807 On the Gradual Formulation of Thoughts While Speaking.

The significance of this essay for speechwriters is that he suggests a way to clarify thoughts is not through reflection but by speaking.

My dear thoughtful friend: if there is something you want to know without being able to find it out through meditation, turn to any acquaintance you run into to talk about the matter.

Kleist suggests that the person you’re talking to doesn’t need to be clever or know anything about the subject under discussion.

As an example he quotes how the great French playwright, Molière, would test a good line out on his maid, and he claimed that her judgement was usually more sound than his own. The German playwright suggests that creativity is a flowing process:

The French say l’appétit vient en mangeant, and this empirical maxim remains true if one makes a parody of it and says l’idée vient en parlant.

He explains how he can struggle with an obscure mathematical problem for hours without any joy.

But if he turns to his sister, by the sheer fact of listening to him, she gets his brain to work on the solution.

It works even better if she has reason to interrupt him, because that excites his brain to finish what he is saying, and raises the quality of his output.

The other person’s face is a curious source of inspiration for a person who speaks. A single glance which indicates that a half-expressed thought is already understood, bestows on us the other half of the formulation.

He goes on to suggest that great orators often open their mouths without knowing what they’re going to say. But the situation, and the tension of the occasion, inspire them to become eloquent.

Dale Carnegie puts this in a more banal way. If you knock someone over in the street, you will soon find they have something to say.

The film maker, Mike Leigh, is famous for his improvisational techniques. He creates plays by putting his characters in rehearsal through the experiences in the plot without knowledge of what is going to happen. By recording the reactions of the cast, he generates text.

The final script is a filtered version of that text. So the script can be both spontaneous, and yet, fixed, to make it both fresh and easy to film.

For speechwriters it is appropriate to play the role of Kleist’s sister, stimulating the speaker to produce thoughts, and then with frequent attempts to interrupt the flow of thought, you can stir up the mind of the person, thus producing sharper and more colourful ideas.