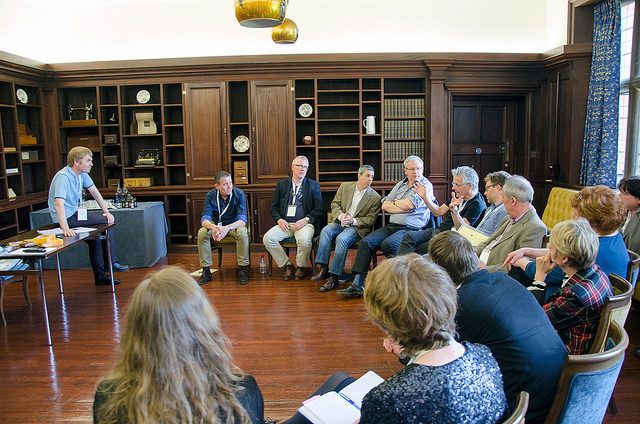 One of our members who works in the Scottish Parliament, Rodger Evans, wrote this quiz for delegates for our conference at Westminster College, Cambridge. See how may you can answer…

(1) From whom did President Obama borrow the catchphrase “yes we can”?

(2) Who said towards the end of a recent acceptance speech: “I’m going to put an egg in my shoe and beat it”?

(3) What was deemed novel about David Cameron’s 2007 Tory conference speech?

(4) When he used the phrase “evil focker” in the Scottish Parliament as part of the Make Poverty History campaign in 2005, to what was Bob Geldof referring?

(5) Who said: “I don’t believe in being serious about anything. I think life is too serious to be taken seriously”?

(6) Samuel Johnson said which of the following?

(7) When Diane Abbott tweeted “it was X what won it”, regarding the outcome of the Scottish independence referendum in September 2014, who was she referring to?

(8) In Margaret Thatcher’s famous “The Lady’s Not for Turning” speech, what had inspired its author Ronnie Millar to coin that phrase for the Prime Minister?

(9) Who said of a speech-giver’s wife: “Can we bring her out again? Well, she basically has that thing of appearing to be a normal human being”?

(10) With what frequency did the then Scottish First Minister Alex Salmond drop “clap traps” – theatrical or rhetorical devices used to win applause – into his April 2014 party conference speech?

(12) Who holds the copyright to the speeches of Dr Martin Luther King?

(13) Who holds the record for the longest speech in the UN, clocking in at close to eight hours?

(14) Who said: “I prefer tongue-tied knowledge to ignorant loquacity”?

(15) As set out in The Devil’s Dictionary, Ambrose Bierce’s view on oratory was:

(16) According to the Penguin Book of 20th Century Speeches, the greatest orator of the century was:

(17) Chiasmus is affectionately known to its friends as

(18) Who said when asked to name the three most important elements in oratory, “Delivery, delivery and delivery!”?

(19) Which Welsh actor became a You Tube hit with a weather-defying speech he made on St David’s Day this year?

(20) Who began an awards acceptance speech by dropping the award and trying to piece it back together?

Send us an email if you’d like a copy of the answers.