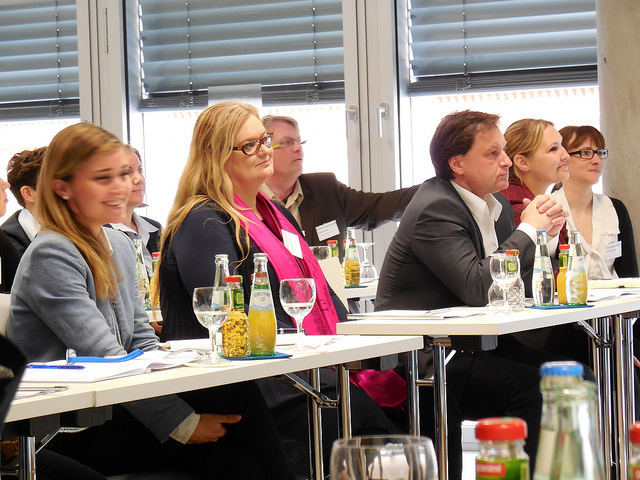 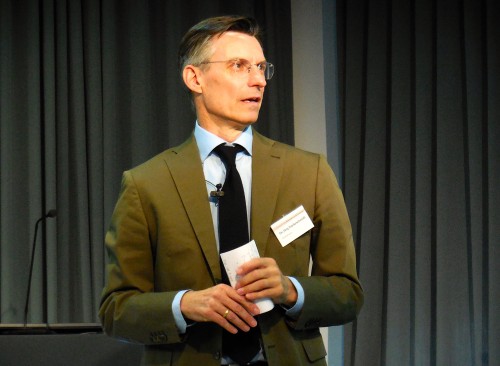 On 18 May 2015, I travelled to Berlin for a speechwriters’ conference.

I’ve heard anecdotally that it was Lawrence Ragan the founder of Ragan communications in Chicago, who came up with the idea of a conference for speechwriters in the late 1980s.

I’ve got Lawrence Ragan to thank, because when I visited his conference in 2008, it inspired me to organise a European equivalent, and to start the UK Speechwriters’ Guild in 2009.

Years later, I discovered the Germans were ahead of us in the UK. In 1998, Thilo von Trotha, a former speechwriter for Helmut Schmidt, launched the Verband der Redenschreiber deutscher Sprache (VRDS).

It was even more of a surprise to discover that since 2012 there has been an annual Tagung Redenschreiben in Berlin organised by the Deutsche Presseakademie.

My German is passable, so I made the trip.

One of the main attractions was that the man himself: Thilo von Trotha. He was speaking at the conference. 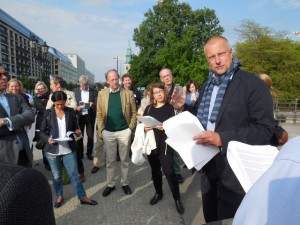 This conference began with a ‘Spaziergang’ – something that suits writers very well. Peter Sprong, a speechwriter from Cologne, took us on a walk around some of the key places in Berlin where historic speeches were made.

We stood in front of the castle where Karl Liebknecht declared the German Socialist Republic in 1918, we then made our way to the church where Richard von Weizsäcker described his vision of Berlin as the capital of the reunified Germany in 1990. Then we moved to the spot where Martin Luther King addressed East Germans in 1963.

I had a chance to say hello to Thilo von Trotha, who was also on the walk. I told him I’d attended the VRDS conference in Berlin in September 2014. He asked me how Anglosphere conferences differed from German ones. I said ‘humour’ – the Germans just didn’t seem to do humour. Herr Trotha agreed without a beat.

Yet Thilo von Trotha opened the conference with a playful interview. He told us about his work with Helmut Schmidt. He didn’t think access was to the speaker was of overwhelming importance. The important thing was to know about the office, and to imagine if he were in that office, what it would be appropriate to say.

He talked about how a speech needs to be summed up in one sentence – and that sentence is like an embryo. All the information that goes into the future offspring, is already contained in the embryo. 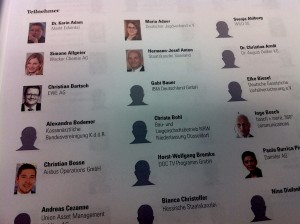 He also emphasised how important it is to ‘gewinnen’ rather than ‘besiegen’: you need to charm, not browbeat the audience.

Herr Trotha is in the freelance speechwriting business, which is rather small in Germany, as it is in England. One delegate asked, what can you charge for a good speech? €10,000 said Herr Trotha. Though not every week.

The next day the conference proper opened with an address from Jörg Hackeschmidt. He explained the complex processes that go into presenting the German Chancellor’s speeches. He also told us that Angela Merkel was a ‘physicist first and politician second’.

Steffen Rutsch was engaging because he revealed some vulnerabilities. He explained how he writes 200 speeches a year for the Deutsche Bahn. He talked about the importance of creativity, the variety of the job and the ‘exotic’ demands it makes.

We then had a workshop lasting 90 minutes which stretched my German language skills, before we had a hearty lunch with some delicious pieces of asparagus. 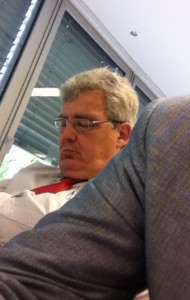 Afterwards there was a The Voice style face-off with two corporate speechwriters going head to head. Rather than lifting us after the meal, it showed that the Germans lack a sense of razzmatazz. When it was the speechwriter from Siemens versus the speechwriter from K+S AG – the world’s leading suppliers of standard and speciality fertilisers – is that a surprise?

Over Kaffee and Kuchen we then had a speed networking session, which involved swapping cards with other speechwriters. There were over 90 of us at the event. The printed delegate list was new: they had passport photos of many of us.

This was a wonderful opportunity for me, because I’m promoting our conference that takes place in Berlin in October. Though I was a bit disheartened to discover the speechwriters I spoke to preferred to send their speeches to a translator rather than writing them in English themselves.

Later in the afternoon Andreas Schmidt from Deutsche Telkom did some PowerPoint which covered the theme of the conference ‘Redenschreiben in Zeiten der Digitalisierung’. One oversight of the conference organisers was not to have a Twitter #hashtag. Although once that was sorted, there didn’t seem to be many tweeters in the audience.

In the Anglosphere, we like to end with a bit of American ‘uplift’, this day ended with a 90 minute workshop.

Also at European Speechwriter Network conferences, we all go to the pub afterwards. After I had exchanged a few words with the organiser, I left the venue and found myself on the pavement alone.

I enjoyed the day, which marked my 14th speechwriters’ conference. I was surprised how insular the event was. There was nothing on the international element of speechwriting (multilingual audiences, interpretation or writing in English) but then again that’s what we cover. The classroom desk layout of the venue took away some of the intensity good speechmaking can generate.

Still, it showed that the role of speechwriter is respectable and established in Germany.

The European Speechwriter Network is coming to Berlin on 22 & 23 October 2015.