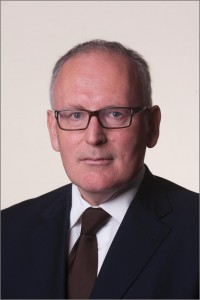 Search Linkedin for those people who share a vocation for speechwriting across Europe, and you’ll find a few German Redenschreiber, a small well-connected gang of Danish taleskriver, but hundreds of Dutch speechschrijver.

Perhaps because of some rhetorical tradition, or quirk of their educational system, the Netherlands breeds speechwriters.

This would be fine. After all nobody is going to take over the world gurgling Dutch.

What is extraordinary is the number of Dutch who can write accessible, idiomatic speeches in English with a deep and sensitive knowledge of the culture.

Yesterday I attended the Policy Network event on Europe at the Guildhall in London.

The Finnish Commissioner Olli Rehn spoke well, but it took a while to tune into his accent, and he never really rose above a few technocratic phrases.

What a contrast with Frans Timmermans, the Dutch Foreign Minister.

Timmermans began by quoting Monty Python’s Life of Brian, ‘What have the Romans done for us?’ – which was a witty way to question Euroscepticism. You couldn’t hear any accent whatsoever in Mr Timmermans voice. He was flamboyant, funny and persuasive.

He talked about the disconnection between European bureaucrats and citizens. He made the simple point that if Britain left the EU, it couldn’t defend Scottish salmon producers from Norwegian competition. He said he wanted the British to be part of Europe and told us that British civil servants were very effective within the Commission.

It was stirring stuff. Where do we find similar speeches from pro-European British MPs?

Timmermans even had the audacity to warn us by paraphrasing our greatest orator: “As Winston Churchill said, if you feed the crocodile of Euroscepticism – my addition to this quote – the only thing you will achieve is the crocodile will eat you last.”

The keynote of the day was to come from Herman Van Rompuy. Nigel Farage once described him as having ‘the charisma of a damp rag’.

Rompuy has an accent, but his speech comprised simple sentences with some sensitive use of metaphor. Lines like:

“How do you convince a room full of people, when you keep your hand on the door handle? How to encourage a friend to change, if your eyes are searching for your coat?”

Those of us in the know, detect the influence of another Dutchman on Rompuy’s speech, Luuk Van Middelaar, the ‘Jon Favreau’ of the European Council.

He has given the President an intimate turn of phrase, which was apparent in the London speech and the speech at the Nobel Prize ceremony last year.

When you also consider the fact that the prestigious American Cicero award for speechwriting in 2012 (which every speechwriter wants to win) was awarded to another Dutch speechwriter, Annelies Breedvelt, for a speech she wrote in English for General Peter Van Uhm, (see it here) you wonder, how do they do it?

Does the skill of speechwriting have a lot to do with understanding grammar and structure? Is it an advantage to stand outside the language you’re writing in? Most native speakers don’t agonize very much about how to say something, because it’s their language.

On the Eurosceptic side, we have talented speakers like Dan Hannan MEP, a kind of public-school ‘Ian Paisley’, but the great strength of these Dutch speechwriters is that they can make a persuasive case for sensible policies in a thoughtful and entertaining way.

Annelies Breedveld will be speaking at the Spring Conference of the European Speechwriter Network on Thursday 16 May 2013 at the Institute for Government. Click here to purchase a ticket.