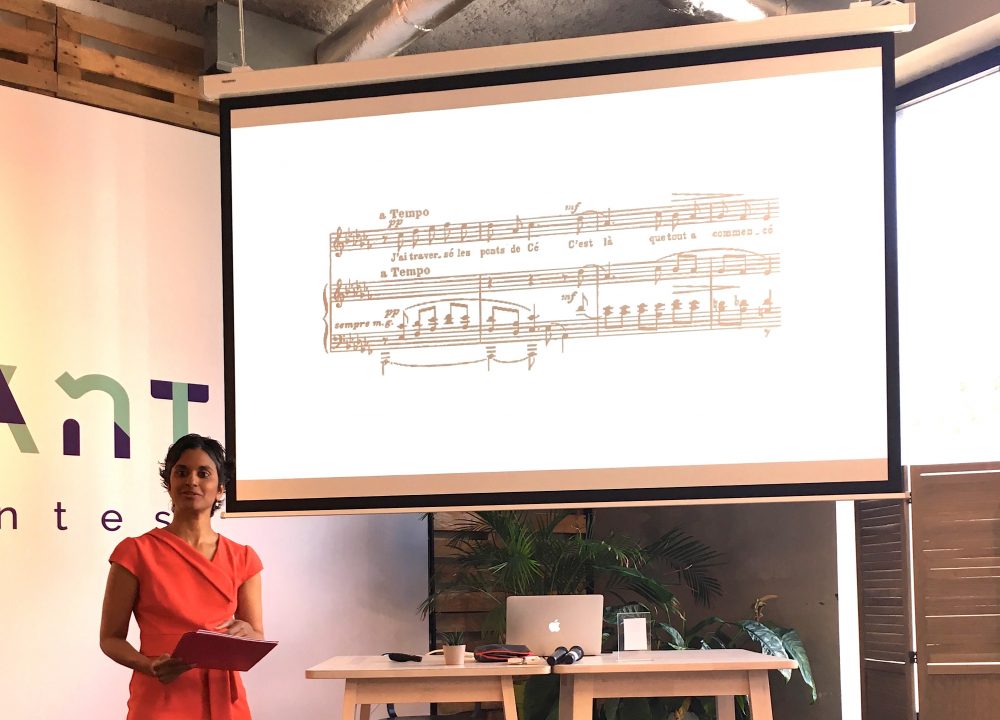 Piped music, muted conversation, a late start, it was all a bit disorganised, until Mallika Lecoeur burst into song.

Mallika, who is a soprano, as well as a presentation coach, sang the first line of Francis Poulenc’s J’ai traversé les ponts de Cé. The day before I’d watched a video about the Troxler effect, and here it was in practice. The distractions faded. My attention was held for the rest of the day. 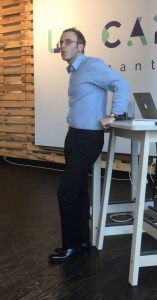 Mallika developed her presentation into the five ‘c’s of confidence en soi: conviction, corps, contrôle, connexion and comprendre. I particularly liked her stories about how the body movements can unlock eloquence, and her counterintuitive point that if you have a strong forehand, but a weak backhand in tennis, you’re better off practising your forehand.

Unlike the Germans and the British, the French had no association of speechwriters until last October.

The European Speechwriter Network worked with a small gang of French speechwriters to put on a conference in Paris. The process of getting a bank account, registering as a society and building a website, has been a slow one, but La Guilde des Plumes is now established. This was the first big outing.

I travelled to La Cantine Numérique in Nantes to take part. 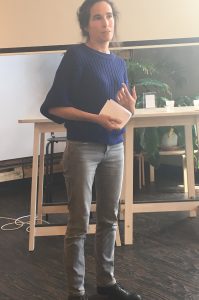 Mallika was followed by a gripping presentation from Fabrice Epstein, from Saul Associés, a Paris law firm. Mr Epstein defended Pascal Simbikangwa, a Rwandan politician, who was accused of genocide by a French court. Mr Epstein agreed to take on the defence of Mr Simbikangwa. This demanding brief was made more poignant for him because members of his family had lived through genocide. They were murdered in the Holocaust. He’s written a book about his experiences. Mr Epstein had also taken up the cause of defending the anti-Semitic pamphlets of the French writer Céline.

Anne Pédron-Moinard, the President of the Guilde, then described how she made the transition from teacher (for ten years) to speechwriter. She discovered she could reuse many lessons learnt in teaching that could be applied to speechwriting – obviously a the mood of a lesson on a Monday morning, a Tuesday afternoon or a Friday afternoon would differ greatly. Images always pepped up a class. She thought that aiming to deliver a ‘un grand discours’ every time was unrealistic. 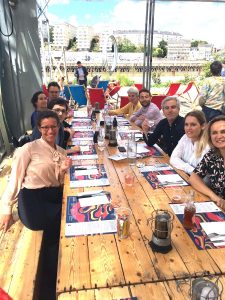 Anne Bouillon was a lawyer based in Nantes talked about how she defended people in court. She described how, when painting the picture of a crime to a jury, she would evoke the geography of the local area – the walls and the roads would be witnesses (a technique I think I’ve come across in Cicero).

We then went to for a meal at la cantine du VAN for lunch.

After lunch there were two breakouts. I did an improv session with Alexandra Eliazord. The others went on a walk with the gardener from Nante’s jardin des plantes: Romaric Perrocheau, who described ‘la créativité en marchant’.

The closing keynote was delivered by Aziliz Gouez, who used to work for the Irish President as a speechwriter. She gave a fascinating account of how she as a French woman, adapted to the challenges of writing for a President who was a poet. By immersing herself in the history of Ireland, she found a new perspective on Europe.

This was a great start to what we hope will become a cultural fixture in the intellectual and creative life of France in years to come.

The European Speechwriter Network will be hosting their 19th Speechwriters’ & Business Communicators’ conference at the Centre Cultural Irlandais in Paris on 26 & 27 September 2019. Tickets are available here.